In 1768, Royal Navy officer James Cook searched the coast of England for a special ship. He concentrated on a type known as a Whitby collier, a coal-carrying vessel that originated in the port of the same name. Cookâ€™s previous experience told him their seaworthiness, cargo-carrying capacity and shallow draft would be ideal for the important mission that had been assigned to him. 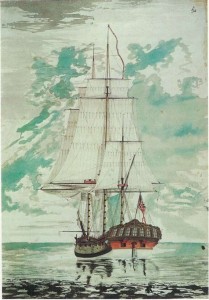 Until this time exploration had been for political or economic gain but Cook’s primary objective was science. His expedition would transport a scientific team, led by Joseph Banks, to Tahiti in the South Pacific to observe the transit of Venus, a rare celestial event predicted to happen in 1769. It had been theorized that the distance to Venus could be measured by noting the difference in its apparent path across the face of the sun as seen from widely separated locations on Earth. Astronomers already knew the relative distances between objects in the solar system. If the actual distance between any two were known, they would have the key to calculating the absolute scale of the solar system. The transit of Venus would give that measurement and observations from Tahiti would provide the long baseline needed for accurate results. The scientists were anxious to be on their way since the next transit would not occur for another 105 years.

Cook found a suitable ship, and it was renamed HMS Endeavour. From 1768 to 1771, the Endeavour team explored, catalogued and mapped countless natural wonders. (A brilliant account of Cookâ€™s adventures, called Blue Latitudes, was published last year by Pulitzer-Prize winning journalist Tony Horwitz.) The Venus observations allowed astronomers to calculate its distance from Earth with an error of only five per cent. Cook was given command of another voyage in 1772, this time with the Resolution, another Whitby collier. Resolution returned in 1775 having taken Cook on his second circumnavigation.
A third voyage was undertaken in 1776. The goal was to search for the elusive Northwest Passage from the west side of North America since all attempts from the east had thus far failed. After discovering the Hawaiian Islands, Resolution sailed up the west coast of North America to the Bering Sea but was stopped by pack ice. Returning to Hawaii for the winter, Cook was killed in a native uprising. The surviving crew made it back to England in 1780.

But what became of his ships? The post-Cook record of Resolution has been investigated by the modern day Captain Cook Society. They affirm she was sold to French whalers who changed her name to Marie Antoinette. Later she became the cargo carrier La LibertÃ© and ferried supplies to North America. In 1793 La LibertÃ© was seriously damaged and abandoned at a wharf in Newport, R.I. Newport locals apparently knew La LibetrÃ© was Cookâ€™s ship but incorrectly assumed she was Endeavour. Despite a glorious past, Resolution sat neglected before finally sinking into the mud a few years later. The Newport waterfront has seen plenty of development since the 1790s yet somewhere below an area of reclaimed land the remains of Resolution still lie. A local group, the Rhode Island Marine Archaeology Project (RIMAP), believes they have identified the location.

RIMAP is also actively investigating shipwrecks from the British Revolutionary War. They have surveyed several sunk by the British in the shallow water of Newportâ€™s outer harbor in 1778 to prevent the entry of enemy ships. In the winter of 1999, while researching the identity of these wrecks, RIMAP was amazed to discover that one was the transport Lord Sandwich. Documents indicate it was once owned by the Royal Navy and sold to a private owner in 1775. Her former name: H.M.S. Endeavour.